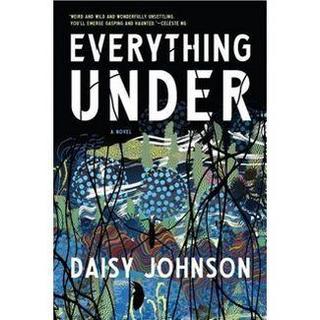 I've been living in a Daisy Johnson world after reading her collection of stories, Fen, and her first novel, Everything Under.  It's a world where the landscape is active, one where reason and logic are always subservient to imagination, where dreams and intuition rule.  Fen, her story collection, is raw and ragged, and even when the stories are less successful, it's not for a lack of boldness.  The women in these stories often identify with animals and nature while the men are possessed by a need to dominate both.  The female characters in these stories are cunning and smart, and they either overpower, slip away, or confront.

These themes continue in her first novel, Everything Under, a retelling of the Oedipus myth through a gender-fluid, time-fluid story of a daughter searching for the mother who abandoned her.  It's set in the lawless houseboat communities on the English canals where shifting reflections and murky depths confuse the characters' lives, and soon, the daughter and a trans son, independent of each other, are searching for the same woman.  Despite having two point of view characters and many shifts in time and place, Johnson is a brilliant guide, teaching the reader how to navigate this restless narrative.  The story unfolds in the only way a dream-like story should, in bits and pieces, setbacks and revelations, with a mix of reality and myth.  The title is perfectly descriptive for a novel that illuminates the deepest, inchoate desires of our primal selves, the two characters groping in the watery darkness, looking for the mother who brought them into her secret world and then tossed them out, over and over.  Johnson's great accomplishment here is that she creates a formal narrative with a cohesive, logical structure and all the signposts necessary for a reader to find her way, but nevertheless feels evolving, casual, urgent and immediate.  These are all the elements of a good mystery, but this one has its own peculiar and wonderfully strange narrative force, a result, I think, of characters who were taught a secret language and eschew rational, goal driven lives.

I admired the lack of mundane detail.  Johnson refuses to dabble in the minutiae of undramatic detail, nor does she worry about getting a character from one place to another.  This means that the details she does provide are charged, potent, active.  For example, in an important scene that takes place in a Chinese restaurant where "there was chips and macaroni cheese on the menu along with the spring rolls and chow mein," Fiona and the first person narrator, Gretel, order many platters of food.  "The dumplings were thick.  The pork had a layer of fat which had burned to crackling. The dan dan noodles had hidden caverns of mince buried beneath them.  I gave up on the chopsticks, asked for a fork." In this scene, as Gretel waits for Fiona to deliver an essential bit of information, information the reader already knows but is curious to see if Fiona will deliver, the food details are sensuous, and the act of eating is labored, building anticipation.