Imagine Me Gone by Adam Haslett 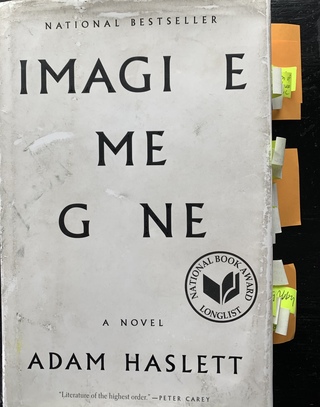 I just finished reading Adam Haslett's 2016 novel, Imagine Me Gone, for the second time.  I expect I will reread this magnificent novel every few years, and right now, I'd like to talk about the two things that, once again, I found terrifically moving.  The first is the intimacy between the gay son, Alec, who has achieved a reasonably successful adulthood, and Michael, his straight older brother who is never able to become emotionally or financially independent and has struggled with a debilitating anxiety for most of his life.  As a sibling who has been a caretaker of another sibling, I recognized all of the stages of this fraught relationship, the desire to be free of the other sibling's dependency, to make light of his or her struggles, and finally to cure her once and for all so we could be equally independent and functioning.  This is a role I suspect many writers are familiar with, and it makes sense because as sibling-parents, often asked by our own overwhelmed parents to help with the problem child's care, imagination is the one place we can escape the burden.

Alec tries to help Michael get off of all of the psychotropic medications he'd been prescribed over the years that now were making him sicker.  They retreat to a cabin in Maine for a few weeks in the winter, just the two of them.  The plan is for Michael to cut back gradually and then stop altogether as Alec helps him with withdrawal symptoms.  He resists at first, but because his mother and sister support it, and he has no other choice really, he finally agrees.

"What he had said to me a moment ago was true.  I hadn't been listening to him, not for years.   I'd wanted him to be better for so long that I had stopped hearing him tell me he was sick" (330).

At the worst point, after days when Michael is submerged in sleeplessness and mental fog, Alec plays a slow, romantic disco song by Donna Summers and comes in close to his brother.  The drugs have made Michael gain a lot of weight and sweat copiously.  "How long had we both been ashamed?  How long had he suffered alone?

"I stepped in closer and, taking his wrist in my hand, guided his arm around onto my waist, and put my own on his, holding him to me.  Gently, I pressed his head down onto my shoulder.  And then the two of us leaned against each other, and danced" (330).

This is a powerful scene because music has been the only reliable constant in Michael's life, the one thing that could focus his overactive mind, but he has never been able to, or even desired to, dance.  So as Alec leads him into it, his resistance vanishes and they share, for the first time, a true physical closeness.

The other thing I want to talk about is the development of Alec's romantic relationship with Seth.  First, we're shown a pick-up Alec has with a man on a train and it's clear how rote and performative it is.  They make their desires known, have sex, part ways.  So, when Alec meets Seth on an online dating site, he is prepared for it to be just another pick-up.  He's ready to follow the script of anonymity, but Seth surprises him with tenderness, and though it confuses him, he starts, despite his better judgement, to feel hopeful. After their first night together, he's on the subway, late for work:

"I looked at my fellow passengers.... They avoided my open gaze as they would a beggar or lunatic.  Normally, I would be full of tiny aversions, or avarice for other people's lives.  The absence of all that disoriented me" (230).

After all this family's troubles, after the sometimes very funny, obsessive outpourings of Michael's mind, after his father's own struggles with mental illness, the narrative opens up to this surprise of shared love. Relative to everything else, the tenderness between Seth and Alec feels buoyant and miraculous.  I believe it's this contrast, this wholly unexpected happiness that gives Imagine Me Gone its power.