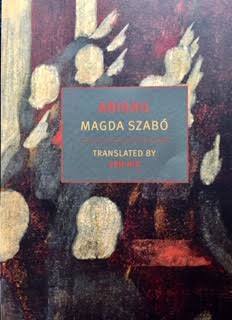 Abigail, by the Hungarian writer, Magda Szabó, is a lighter read than her other novels.  It lacks the brilliant strangeness of The Door (my favorite Szabó novel), but it is compelling in a different way.  Written in the third person omniscient point of view, it is about a period in a young girl's life when she's sent away to the fortress of the Bishop Matula Academy, a strict religious boarding school for girls that is far away from the privileged life she knew in Budapest where she lived with her father, a general in the army, and her beloved French tutor.  It is 1943, Hungary is one of the Axis powers, and in the complex landscape of war, her father has many enemies who would not hesitate to capture and torture Gina to get her father to give away secrets.

Gina, who is highly emotional and impulsive, is not used to the kinds of restrictions the school imposes, nor does she understand why her father has sent her away.  Time vanishes in a strict routine of lessons and prayers and is relieved only by the secret games the girls play amongst themselves under the always watchful eye of the adults.  But for those games and the bonds they create, it is a harsh existence.

At the halfway point in the novel, her father reveals the reason she's at the fortress.  Gina's attitude changes and so does the narrative.   The retrospective is introduced, and as it disrupts the present, her future life is briefly visible.  We learn what will happen to her father and we learn who at the school will come to her assistance, but in addition, our suspicions are confirmed: Gina's hasty judgements of the people around her are completely wrong, and the way things work is quite opposite to her assumptions.

The retrospective is invoked more and more often as the story nears its final climax and the reader welcomes these interruptions: "Later, as an adult, Gina often thought of that particular Sunday service" (143)."Towards the end of the next hour...something happened that none of those involved...would ever forget" (162).   "No one, not even Kalmar, could ever explain what happened next" (186).  As these fast-forwards into the future populate the narrative, they cast a shadow over her present circumstances.  We realize Gina will experience grief, she will know who had been helping her all along, and one day, she will reminisce with her own children about this strange and long-ago year.

Contrary to what one might suppose, knowing what will happen does not interfere with the building of suspense.  Instead, it adds to the urgency.  We want her to grow out of her childishness; we want her to fully inhabit these days when her innocence is so pressured by the sadism of the war and the Bishop Matula Academy, because only with open eyes can she separate the true heroes from the false.

As you might have guessed, this is a novel where the reader always knows more than the protagonist.  That's a lovely position to occupy because we are aware of all of the things she misses.  In addition, the war, and the conflict between the nationalists and resisters hovers in the background.  It is another shadow, like Gina's future, that adds importance to a story that pretends to be about a spoiled sixteen-year-old who hates her boarding school.  But it never is.  Even at the beginning, the starkness of the setting is a clue to the author's wider concerns.  Gina's story is also the story of the Hungarian resistance movement, and the routine cruelties within the academy mirror the life and death concerns without.