The Book of Lost Light by Ron Nyren 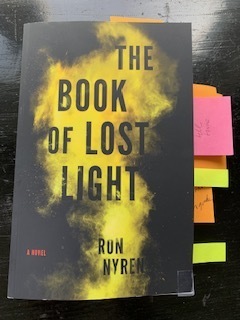 Ron Nyren's The Book of Lost Light, published in 2020 by Black Lawrence Press, is about a photographer's obsessive desire to reveal the invisible data of time.  It begins with what is probably the most enticing first line I've ever encountered:  "From the time I was three months old until I was nearly fifteen, my father photographed me every afternoon at precisely three o'clock" (1). It's the word "precisely" that hooked me, suggesting the obsessive nature of the father's desire. Nothing gets in the way of the daily photographing of his son from all possible angles.  Even when Joseph matures and the requirement of nakedness becomes problematical, his father, Arthur, is unable to adapt or revise.

Arthur Kylander is a protégé and former employee of the photographer Eadweard Muybridge who was famous for photographs that revealed startling truths about animals in motion.  Kylander is a mechanical engineer who has a photographic project of his own, documenting not movement, but time.  The problem is, time moves slowly and despite his devotion and inventive engineering of cameras, he never achieves Muybridge's status and fame.

But, in a surprising and brilliant inside-out irony, the novel is successful where Kylander failed because it is a record, in the form of words, of the coming to manhood of Arthur Kylander's motherless son, Joseph, who is the subject of his father's project.  His growth parallels his father's diminishment as Arthur's lonely obsession eats away at his spirit.  Luckily for Joseph, there is a third person in their strange household, Kylander's niece Karelia, who arrives at age twelve to help the widower with his infant son.

As long as both Karelia and Joseph are dependent upon Arthur, peace reigns in their small world, but when they mature into independent personalities, Karelia first, and then Joseph, trouble arises and Arthur's obsession reveals itself as the spiritual black hole it has always been, and both, in different ways, try to escape its hold on them though Joseph, a devoted son, struggles to recognize the necessity.

The beauty of this novel is that Arthur Kylander is neither predatory nor prone to violence, yet his possessiveness creates a quiet stranglehold.  This reader, of course, was wary from the beginning, and through the poignancy of Joseph's first-person retrospective narration. I watched him come into maturity until, with the help of the 1906 San Francisco earthquake and fire, he steps into independence.

I admired so much about this novel it is difficult to capture it here without giving too much away, so I will mention what felt outstanding: a retrospection that is subtle, yet achieves great urgency; the slow unfolding of complications in this father/son relationship; the use of an historic event to initiate change in the characters' lives; and the tender, loving portrayal of an artist's borderline madness, something many artists and writers can empathize with.  But what I found truly compelling is that the trespass on Joseph's body is not sexual or even really, physical.  That is what makes Joseph's duty to escape it so difficult.  He doesn't want to hurt his father's feelings and yet he must.  Here he is when, as a teenager, he knows he must not step into the center of the room where the camera is, that he must, finally, claim his body as his own.  Yet even though he understands it intellectually, he first reasons with himself because he doesn't want to wound his father. "I told myself it was only one moment of the day, and that it changed nothing, but I still couldn't move" (225). It is the smallness and apparent innocence of the trespass that makes it difficult for Joseph to disengage, but that's also why it's so pernicious.