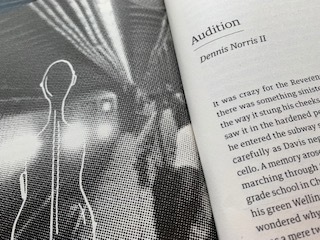 Lately, I've been reading more fiction published by small presses because, overall, those books receive less attention from reviewers and so it's often harder to know about them.  I also want to occasionally talk about a short story when I discover one that demands to be remarked upon.  I find stories in the few quarterlies I subscribe to or, when the content interests me, the single issues I order of others.  A recent volume of American Short Fiction, Vol. 23, Issue 72, winter 2020, was devoted to Black emerging writers chosen by Danielle Evans, a celebrated writer of short fiction.  Of the nine stories, two stayed with me long after I finished reading them, a story by Jonathan Escoffery called, "If He Suspected He'd Get Someone Killed This Morning, Delano Would Never Leave His Couch," a story stuffed with dark humor and absurdity that crescendos, elegantly, in a surge of recklessness fueled by frustration.  The other is "Audition" by Dennis Norris II that ends with the same intensity but builds to it slowly until a dramatic event on the last page that comes as a complete surprise because the author has so successfully misdirected the reader's attention.    That's the story I want to look at here; I want to try to deconstruct the way Norris sets the reader up.  I have to do it without revealing the ending because, for the story to have its powerful effect, the ending must be a surprise.

"Audition" is about the relationship between a widowed father and his teenage son, and though we have access only to the father's third person limited point of view, the story works like a duet.  The high-school age son, Davis, is always within the father's sight and it's easy to infer Davis' attitudes from what his father, Reverend Doctor Preston McKinsey, sees.  Davis is given only two opportunities for dialogue.  Here is one of them:
"'His name is Jake...And we're together.' He waited, then spoke again, more quietly, the whisper of a smile gracing his lips.  'I have a boyfriend'" (135).

That proud statement is wasted on the Reverend who has returned home unexpectedly in the afternoon to discover Davis and a white boy having sex in the backyard pagoda.  When the Reverend tells his son to leave the house he replies, "This is my house too"(135), but that second line of dialogue also has no effect on the Reverend and from that point forward, Davis barely tolerates the presence of his father, avoiding all eye contact and physical proximity, which is difficult because they continue to live together.  Davis' silence communicates as effectively as words and through the father's eyes, we understand that his son is consumed with rage and shame.

The other thing we know about their relationship is that the Reverend is proud of Davis' devotion to music.  He has been invited to audition at Julliard and he practices his cello many hours every day to prepare.  In fact, the afternoon the Reverend came home unexpectedly, the first thing he noticed when he opened the front door was that he didn't hear the sound of the cello coming from his son's bedroom.

Before Reverend McKinsey had been called to the clergy, he'd been a drinker and womanizer and now is not only a successful man in terms of the American culture (the description of the house and its suburban landscaping is lavish and exact as he lays fond eyes over all of it when he first drives up), but he is also a righteous man in the Church, an institution for which he has black ministerial robes and black well-polished shoes.  In fact, as the father waited for the son and the white boy to leave the pagoda, he sat down in front of the sliding glass door to polish his shoes because, despite the filth of the world, the filth even in his own house, he would be clean.

It is essential that the reader is locked into the Reverend's point of view as the story moves forward because he is the active character, the one who needs to find something, the one who is left with an emptiness inside after he shames his son.  The story is constructed of paired scenes that toggle between the present, when Davis and his father wait in a crowded subway station for the train that will take them to the audition at Julliard, and the past, the afternoon when the Reverend experienced "that startling sensation of seeing something that, on some level, he'd always known was true, coming to fruition"(133).

It's ironic that a story about a father discovering his son's homosexuality is based on binaries: father/son and present/past, but that is merely one of the brilliant ways the author misleads us, setting us up to expect an ending that will conform with what has come before.

The other misdirection happens on the subway platform where the Reverend watches Davis through the crowd, because Davis, even on this trip to New York City, avoids standing close to the father who has so humiliated him.  From the rear of the platform, the Reverend watches his son move forward closer to the tracks.  With the cherry-red cello case strapped to his back, he bends down to respond to a little girl in a group of Catholic school girls who has asked him a question.  At the same time, the Reverend is keeping track of a homeless man who is smelly and out of control, whirling, shouting, flinging off his shirt.  The author makes us realize the homeless man is volatile and we brace for something to happen.  We watch warily, and because Norris has set the scene so beautifully, we understand that chaos is about to erupt.  The crowded platform, the school girls and the nun, the deep well of the tracks, the father standing way in the back who by now deeply regrets how he treated his son and wishes he could, once again, feel his love.  But most of all, our attention is directed to the wild man who seems so out of control.

When I finished reading, it wasn't only the shock of the scene I cannot describe that left me breathless, rather, it was the understanding that in a stunningly oblique and non-prescriptive manner, it was a redemptive act.
I will leave you there.  Order the issue, or find it at a library.