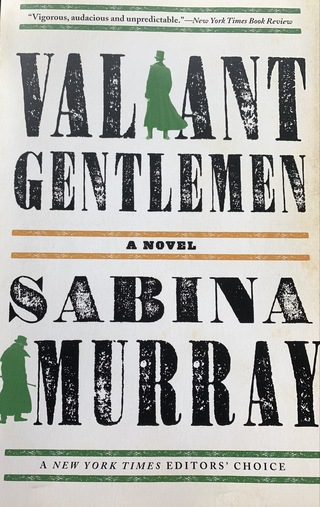 After finishing All the Light We Cannot See by Anthony Doerr, I turned to Sabina Murray's Valiant Gentlemen, another novel about lives impacted by World War Two written in the third person omniscient voice and narrated in the present tense.  But there the similarities end.  In Doerr's novel there is a satisfying neatness in the parallel stories of two characters who grow up in different European countries that will find themselves at war.  This symmetry creates a balanced narrative design that is not unlike the three dimensional puzzles Monsieur LeBlanc constructs every birthday for his blind daughter's fingers to explore, with their cleverly interlocking parts and perfectly smooth surfaces.

Valiant Gentlemen, on the other hand, has a raw messy quality that is equally engaging and totally appropriate for a novel that is about the messiness of love in all its forms: requited, unrequited, homosexual, heterosexual, familial.  At the center of its vigorous sprawl across Africa, Europe, and the United States, is a triangular friendship between three historical figures: the Irishman Sir Roger Casement, his English friend Herbert Ward, and Ward's wife, Sarita Sanford.  As in any triangle, the love is unequal: Casement feels an enduring passion for Ward that lasts throughout his life as he takes up one political cause after another, first working to end the enslavement of African tribes in the Belgian Congo, then becoming a leading figure in the fight for Irish independence, sacrificing health and emotional stability as he travels across continents raising awareness, money, and arms.  The novel follows the life stories of these two adventurers who first meet in Africa where Casement falls in love with Ward yet keeps his feelings secret. The narrative moves from one to the other, and then, wisely, to Sarita, who understands Casement's predicament while Ward remains oblivious.   The friendship and the marriage are changed by the war and Sarita, as a character, grows in complexity, becoming, in the end, the most "valiant" of all three.  But it is always with Casement, flawed, lonely, betrayed, that the narrative gets its greatest momentum.

I wanted to understand why, in a novel that features two other richly drawn, complex and interesting characters, he is the one who is most compelling, a magnet exerting its force even when we are far removed from him.  To find the answer, I examined a crucial scene.  It is 1889 and Casement has travelled to New York for the first time.  An elegant gentleman notices him standing at a hot dog cart looking confused and offers to take him to a restaurant.  Later, he takes him to a gay bar, the kind of place Casement has never been to before, maybe never even imagined, and introduces him to the regulars.  It is the first time Casement's attraction to men can be admitted, perhaps even to himself.  "At the end of the evening, when more drinks have been consumed than can be reasonably counted, it is Rourke [another Irishman] who leads the way past the urinals and into the back alley" (116).

Casement is alone the next morning, lying in bed, recollecting the events of the night before.

"There is Rourke, 'I'll show you the way,' and Casement following him through the tables, Rourke checking over his shoulder to make sure that Casement is still with him.  And then the marble urinals in a long row opposite the wooden stalls. And Casement is using the urinal, and Rourke too, although Rourke finishes first.  And then Rourke ducks his head down, checking beneath the stall doors, which are all closed.  Perhaps a stall is free?  But no. And then Casement is buttoned up, thinking they'll head back to the bar, but Rourke grabs his wrist and jerks his head towards another door.  Casement hesitates because he doesn't know what Rourke is on about and Rourke says, 'Fresh air,' and Casement says nothing, just wanders after him and then they're in the alley.  And then Rourke presses his mouth on Casement's and Casement can feel the man's stubble.  Then Rourke is unbuttoning Casement's trousers as expertly as he must handle his own and after that.  Well.
"At what moment did this happen to him?  At what moment" (117)?

In the passage above, he tiptoes through the memory moving from one connecting word to another, each and, each then getting him closer until he lands on that beautifully meaningless word well, that closes it all up again.  But first, it gives us knowledge.  And curiously, a more direct description of body movements or emotional reactions would not have been as effective.  The very ambiguity and meaninglessness of well forces the reader to enter Casement's mind and fill in the blanks, feeling, with him, the astounding nature of the very private and intimate act he has been hurtling towards, and at the same time, shying away from all of his life.  And because it is just so astonishing, he is unable merely to accept it.  He must interrogate himself again:  At what moment did this happen to him?  At what moment?

As the interrogation continues, he begins to understand the liminal space he has occupied for most of his life until that moment last night when finally, he stepped through the door.

Forty pages later the narrator tells us that, "Casement, like most men, is built of a tough exterior and a tender middle, his constitution only remarkable by the extent to which his inner self is kept secret" (159).  That inner self is leaked to the reader bit by bit as the years pass, but it is this moment in the bar, his cautious exuberance as he recalls it the next morning, when the reader is invited into his most private thoughts: Well.  That one word provides the reveal by not providing it at all, making us interrogate our own imagination to supply the missing details and thereby linking us, in a lasting way, to this compassionate, selfless, deeply flawed human being.
Withholding information from the reader can be a powerful tactic if used sparingly.  In a life-changing scene, if all is not revealed, the reader will be moved to use her own imagination to supply what's missing, putting her, very effectively, in the character's body where she will be inclined to stay.

In other words, less is more.  That old truism states it perfectly.  Less is more because what's not said invites the reader's participation.  Or, in the case of music (if I may switch art forms for a moment), it is like Duke Ellington's plangent piano chords in "Tricky Licks," a tune from an album I've been listening to recently called Jazz Violin Sessions with Duke Ellington on piano, Stepane Grappelli, Ray Nance, Svend Asmussen on strings, Ernie Shephard on bass, and Sam Woodyard on drums.  In many of the tunes, Ellington withholds while the others come forward to fill in.  In "Tricky Licks" he does little more than play a single chord at the beginning of each phrase.  But when that chord sounds, it contains the rhythmic tension of the entire phrase, even as the bass and violins unspool around it.  Those chords have the same function as Well.  They seem to be completely ordinary, nothing remarkable about them at all, and yet, it feels as though they contain the very mystery of life.  As a fiction writer, here's what I want to remember: Hold back.  Restraint creates narrative tension.