THE EXIT COACH
A LENGTH OF WIRE AND OTHER STORIES

THE NOTEBOOK OF LOST THINGS
SHE WANTED SOMETHING ELSE

"In The Conditional Mood" 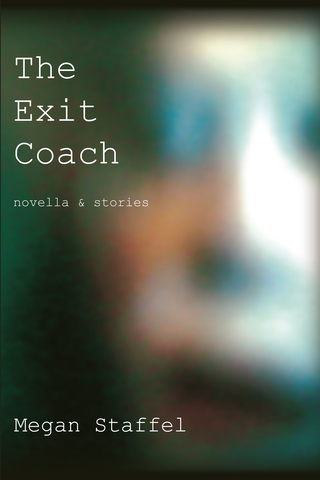 Staffel’s engaging and memorable collection (The Notebook of Lost Things) is linked through reoccurring characters, settings, and themes. The protagonists experience deeply personal transformations and struggle to reconcile their various personas and shifting identities. “Tertium Quid” follows Meredith and Gregory, a couple both over the age of 60. The story centers on how aging affects their marriage, and their fading desire for intimacy. In “Mocked and Invaded,” Meredith’s search for a noisy mockingbird leads her to reflect on how she embodies the many different roles and occupations she has held in her lifetime. In the title novella, Marilyn Prett, a recent high school graduate in New York City, searches for a chance to reinvent herself. She adopts a new name, Ava, and accepts a job assisting an elderly widower and retired talent scout, Harvey Abram. Ava meets Harvey’s son, Ruben, who recruits her to join an off-Broadway production as a dancer. Ava discovers her natural talent as a performer and begins to embrace her sexuality. As Ava’s world widens and her experience grows, she must choose between two very different paths. The conflicts in this collection are mostly internal as protagonists move among relationships, places, and positions. Staffel’s prose is graceful—each sentence flows nimbly into the next with poetic but concise exposition. The book’s greatest strength is its dialogue. The voices Staffel employs are distinct and authentic, and she gives her characters room to delve into compelling discussions with interesting revelations that help push the narratives forward. (Sept.)

A novella and six short stories each find people on the brink of change. Staffel (Lessons in Another Language, 2010) is not gentle with her characters. “Leaving the Meadows” follows a man as he moves his mother from an assisted living facility to a space that can better accommodate her changing needs, while he’s also distracted by a problem at work. More than one story builds upon confrontations between women: the woman who refuses to help a friend in “Arrogance” immediately questions the impulse, but Lana in “Three Rivers” ends a relationship that has become a financial burden and ends up finding a moment of human connection. Fairly routine activities have a polished truth about them in these stories; the couple at the heart of “Mischief” are a massage therapist and school superintendent, and glimpses into their work lives and daily concerns generate empathy for the things they do without telling one another (including the adoption of the titular goat). The Exit Coach, a novella, runs on change and self-discovery. Marilyn changes her name to Ava to establish distance from her burlesque dancer–turned–MTA driver mother, Cleopatra, and takes a job caring for an elderly man that leads her in loop after loop back to where she came from. The description of the health care job and the way Ava is slyly drafted into a performing arts career that draws on her mother’s brassiness exudes grit with a dash of glamour; it’s easy to get absorbed in the world of creating a show, having it succeed, and dealing with the ego flare-ups that ensue. Ava’s triumph is that she doesn’t make one defining change but keeps adapting to circumstances until she begins to feel her own will at the heart of her decisions, and it’s a pleasure to share in. These stories feel like portraits of lives scaled down to pivotal moments, but together they form a mural of humanity in common.

Lessons In Another Language 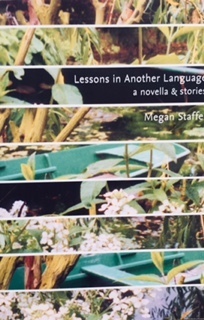 What They Said About LESSONS IN ANOTHER LANGUAGE

"Each of these vividly imagined, richly peopled stories invites the reader into a complete world, and each demonstrates how well Megan Staffel understands the degree to which our lives are defined by family, place, and money. In prose both lyrical and colloquial she depicts the lives of characters hovering on the edge of mystery. Lessons in Another Language is a lovely and illuminating collection." Margot Livesey

"I found myself in Detroit, just a 40-minute flight away from Milwaukee, on an airplane that would not take off. We weren't allowed off the plane for several hours, and while on the plane, we weren't allowed any
electronic distractions. But thank God, because that meant I not only got to read your beautiful new book, LESSONS IN ANOTHER LANGUAGE,but I got to read it the way everyone should, in one great, giddy gulp. I was just amazed - every story was so sure-footed." Liam Callanan

"I had the delicious experience of reading LESSONS IN ANOTHER LANGUAGE cover-to-cover on long day from Portland-Oregon to Dallas flights, with long layovers, and enjoyed it utterly in every way - so well-written, haunting, compelling, suspenseful -- so many well-drawn characters, the younger point-of-view I so often miss in books - perfect. May this book find many friends! BRAVO.
Favorites: Daily Life of the Pioneers, the Linguist -- but actually - every one of them." Naomi Shihab Nye

"I didn't just read this book. It was one of the rare ones that could be savored. The flow of prose unwinding transparent and tensile as spider silk, lightness catching the light."
Stuart Dybek


"Megan Staffel does rural and urban, adolescence and adulthood, tough and tender, story and novella, with equal felicity and grace. The range of this collection--emotional and formal--is as astonishing as her rich and tender evocation of what it is to be alive. This is a book with a vigilant spirit, built to linger and bloom." Michael Parker

THE NOTEBOOK OF LOST THINGS 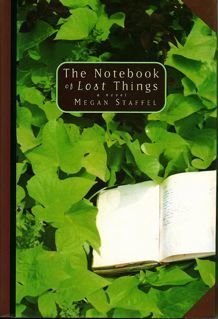 Helene and her mother came to the small town of Paris, New York after World War II as refugees from the bombing of Dresden. They were joining a distant relative only to find that he'd vanished. William Swick, a shy and lonely bookseller, also the town's only dwarf, took them in for a night that turned into a lifetime. Harry, sour and sexually voracious, the owner of the village tavern, looks out of his window and sees something that challenges his cynicism. Stella, the poor half-Mexican teenager who courts danger in original ways, must act as mother to her own mother. THE NOTEBOOK OF LOST THINGS is a novel about the way mystery brings together five unrelated people in a small town, the way the surfaces of life mislead, the way one secret leads to another, and changes things forever.

"THE NOTEBOOK OF LOST THINGS is told in prose that is Zen-like in its clarity, solidity, and attention to the ordinary. From this illuminated everydayness, the secret, sensuous, and always creditable lives of Staffel's characters naturally emerge, and the unfolding of their stories is fixed, so as not to be lost, by this mature and beautiful book." Stuart Dybek, The Coast of Chicago

What They Said about THE NOTEBOOK OF LOST THINGS

Booklist (starred review): "This fresh and lucid tale about the denizens of a small New York town is sure to be Staffel's breakout book. [Her] unusual characters are magnetic and her images surprising and resonant. And her prose is so silken and seamless, her novel flows like one long exhalation as she astutely traces life's cycle of coalescence and disintegration."

The Atlantic Monthly: "Ms. Staffel's intricately constructed novel is set in a decaying town in upstate New York. The place, with its failed businesses and abandoned farms, is solidly evoked. The principal characters, in contrast, are fluid rather than solid, transitory rather than rooted. They are all misfits..., people a bit out of kilter, and how they collide and support one another is the substance of the tale. It is a striking piece of work."

The San Diego Union-Tribune: "Megan Staffel's THE NOTEBOOKS OF LOST THINGS tells how the past and present, desire and futility, are intertwined. It is also the story of survival through imagination...Staffel's spare language and careful, even delicate rendering of Paris and the lives its inhabitants contribute to the prevailing sense of loss and despair, making the rare moments of genuine hope poignant and powerful."

Time Out New York: "THE NOTEBOOK OF LOST THINGS" is ...resonant with clear-sighted humanity and artful, delicate prose. Staffel arrests the flicker of moments, those lost things that make up the experience of our days."

SHE WANTED SOMETHING ELSE 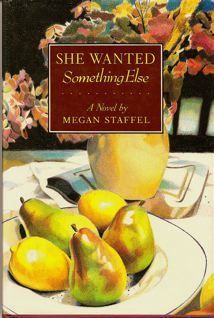 A first novel of uncommon delicacy and sureness, SHE WANTED SOMETHING ELSE is the story of three connected lives and the delicate shifts, hesitations, and redirections that alter, threaten, and renew the characters' relationships over time. Foremost is Rose Ann, a dedicated painter who never does quite what is expected of her--or even what she expects of herself. Imperious and stubborn, she is caught between the demands of her family and those of her life as an artist. Told from the points of view of each of the three characters--Rose Ann, her husband, Teddy, and her daughter, Alma--SHE WANTED SOMETHING ELSE traces Rose Ann's struggle to be artist and wife and mother. It is the story of three imperfectly suited people and the emotional force that binds their lives together.

"From her opening scene, in which a child unhooks a guardrail of a roller coaster and stands up to wave to her mother far below, Megan Staffel shows a fine instinct for rendering scenes that reveal the secret essence of her characters. The daring child becomes a daring woman who risks her marriage to study painting in Rome. Ms. Staffel's portrait of the artist explores the tension between ambition and love with a true novelist's well-balanced compassion." Thomas Gavin, Breathing Water

What They Said About SHE WANTED SOMETHING ELSE

San Francisco Chronicle: "The writing is precise and delicate, the imagery robust and full of flavor. Characters, whether large or cameo, are vivid, moving through emotional terrain both ambiguous and morally complex."

The Seattle Times: "[Staffel] shows us that in relationships, sometimes the shadow is as important as the object that casts it."

A LENGTH OF WIRE AND OTHER STORIES 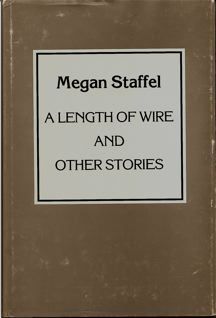 What They Said about A LENGTH OF WIRE AND OTHER STORIES

Rochester Times Union: "a powerful and engaging collection. Megan Staffel communicates subtle insights with a sure touch, and in a spare style which makes her work eminently readable. Her stories resonate in the mind, take hold, and grow there. She is a new writer to rejoice in."

Philadelphia Inquirer: "...her stories have a quiet grace, a compact, nicely understated dignity. She focuses on the relationships between parents and children, the personal past and present, with characters who are always aware of (and sometimes defiant of) the boundaries that define them."