The Mysteries by Marisa Silver 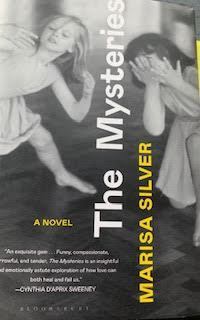 Marisa Silver's beautiful new novel, The Mysteries, achieves something that is rare in novels these days, a redemption that is found less through action than internal deliberation.  Indeed, it models the hard, rewarding work of focused, self-scrutiny.  I read an early, partial version of The Mysteries, and was surprised, and thrilled, by this shift in pacing.  In a sense, the novel mimics the rhythms of life itself: after an adrenalin-laced event there is always the more challenging period of calm.

The Mysteries purports to be about a friendship between two little girls who have difficulty making friends, Miggy because she's bossy and opinionated, and Ellen because she's timid.  It's a pairing of opposites that falls into the pattern of leader and follower.  And yet, in the central scene of the novel, functioning like a hinge between before and after, Ellen makes an uncharacteristically bold move, running across the street instead of waiting for Miggy's father to walk her to the front door of her house, just as a speeding car comes around the bend.

The accident haunts the four parents, but especially the two who were present, Miggy's father, who had turned his head to reprimand his daughter for saying something ugly about her friend, and Ellen's mother, who was watching from an upstairs window, waving at her daughter, welcoming her home.  The other car is not visible yet because of a curve in the road, but after hitting the girl, it disappeared from sight.

Because the accident is placed in the middle of the novel, we discover that the author's hidden purpose all along has been to follow the way tragedy changes lives.  And, remarkably, from within this small, dark corner, each character finds a transformative light.  We watch as each climbs out of that awful event, leaving behind its immediate shock and horror, only to confront the more difficult problem of acceptance.  But how can self-scrutiny be dramatic enough not only to hold a reader's attention, but to exert the strong momentum that propels this short novel?  That's the question I want to consider here, and I have two ideas.

The accident scene, which is the central scene of the novel, is very clearly staged: we know exactly where each player in the scene is and what he or she is doing, and we can see the houses and the curve of the street. But, at the same time, it's expansive.  It contains so much complexity and ambiguity it seems to rearrange itself each time it's reviewed in a character's memory, not in terms of who was where when, that's been established, but in terms of why. When Miggy's father relives it, he discovers something new about his daughter, so that what at first seemed utterly clear, with responsibility weighing most heavily on his shoulders, he finds a new truth that will lead him, eventually, to self-forgiveness.

And here's the second reason for the novel's surprising momentum: empathy.  The reader knows just enough about each character's backstory to intuit the psychological significance of their actions.  She knows that when Ellen's mother waves to her daughter from across the street, that simple gesture is significant for a woman who herself suffered her own mother's abandonment as a child.  And. just before Ellen steps out of her friend's car, as Julian turns around to reprimand Miggy, when he should, instead, be opening the door to escort Ellen across, he is asserting respect and decency, striking out against not only his impulsive child, but everything else that he cannot control in his life, including the neighborhood development that is slowly destroying the hardware store he inherited from his father, and that makes it even more important to "correct" his daughter and stand up for the diminutive Ellen.

The accident is the hub of a wheel, with the six lives radiating out from it like spokes.  The metaphor is apt, because the wheel turns, light changes, time moves on, and things start to look different.  Silver's optimism about human behavior is evident at every turn, and what makes this novel, despite its catch-in-the-throat subject matter, such a pleasure for any reader interested in human nature, and I think that's all of us, is not only the expansiveness of a central scene rooted in unforgettable visual clarity, but the author's ability to articulate the very things that are most difficult to express.  For this writer particularly, language is the tool of discovery.  We see it at work long before the characters wrestle with it on their own.  It illuminates, always, and so Miggy declares in the exuberant opening chapter when the reader is first swept into her propulsive energy,"I am Miggy!" and the narrator tells us, "The words mother and father don't exist without the word Miggy.  She is the reason for them" (4).

As each character climbs out of the hole of guilt and pain, the reader watches the process take five different forms.  Miggy concludes, towards the end of the novel, "Things will happen to her in her life.  They will happen and keep on happening" (150), her thoughts reflecting a seven-year old's attempt to grasp abstraction.  But her father, Julian, understands that "...he has inherited not only a foundering store built on his father's deceptions, but that he has also inherited the deep and abiding knowledge that irrationality is the last, exuberant gesture toward significance" (232).

His realization happens towards the end of the novel, yet it is neither inappropriately simplistic nor conclusive, and the reader must turn it around in her mind before meaning arrives.  Irrationality, yes, of course, the idea that no one can completely determine the outcome of anything. Julian has found the courage he needs to forgive the error he made as one player in a five-player event that happened one summer day with time-stopping synchronicity.  It is this irrationality that every parent, knowing their imperfections, both dreads and accepts with the birth of a child.